Due to increasing cyber crime in Bharatpur, another poor family came under the pretext of 25 lakhs, cheated of 12 thousand rupees on the...

The full form of Apbs

Bharatpur.  A team of Kaithwara police station has arrested two vicious thugs from Mewat area of ​​Bharatpur district in Rajasthan, who cheated across the country by giving fake advertisements of selling goods online through social media platforms. 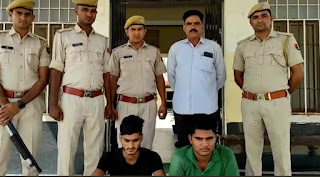 Giving information about the matter, Superintendent of Police Devendra Kumar Bishnoi said that Assistant Sub-Inspector Vishwamitra, a member of the team formed under the leadership of SHO Ramnaresh Meena, after getting information from the informer, blocked the Kasba in front of the government hospital.

Two youths were coming from Pipalkheda side on a Sabari Bina Yamaha motorcycle.

Bishnoi told that when both of them were searched, they found two mobiles in which chats were made on WhatsApp by making fake IDs.

A photo of an army soldier was put in the profile picture, whose WhatsApp chat was checked and it was found advertising a bike and a fridge in his mobile.

When Abid’s mobile was checked, Army’s I card and Cantin card and Aadhar card were found and a bullet motorcycle was found to be advertised and many other items were sold and chatted in mobile on the pretext of getting money by fraudulently.

Transactions were found to happen on phone pay from both their mobiles.  When both of them were questioned in this regard, they have accepted to extort money from persons holding mobile chats by doing dishonesty and fraud and fraud by advertising the said goods.

Constable Wajid 2367, Shelendra 2351 B Bhagwan Singh Driver 1383 were also included in the team formed to arrest the accused.

how to use V wash:

Due to increasing cyber crime in Bharatpur, another poor family came...