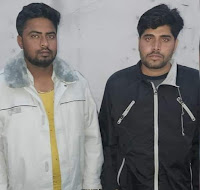 The paper deal was done for 8 and a half lakh rupees.  It was leaked a day ago.

Bharatpur.  Big disclosure came after the arrest of Battilal Meena alias Vikas Meena, the mastermind of REET paper leak.
The paper deal was done for 8 and a half lakh rupees.  It was leaked a day ago.
He had got the paper a day before the exam in Jaipur itself.  During the investigation of SOG, it was found that even before the netbandi, Battilal had sent the paper out and sent it to his acquaintance Ashish on WhatsApp.
When the paper was out, Battilal’s mobile location was in Jaipur.
The paper is out from Jaipur itself.  Ashish gave the paper to the sisters Usha and Manisha to copy.
Another accused Dilkhush was also with Ashish.  Dilkhush also got the paper from this.
When the internet was down, Ashish called Constable Devendra near Karauli gate in Gangapur City.
The photo of the paper in Ashish’s mobile was taken by Constable Devendra.  Then Devendra told the head constable Yaduveer.
33 photos of paper were found in Devendra’s mobile.  From there, Devendra went to the official quarters of the familiar head constable Pushpendra and told the paper and answer to his wife.
All of them had connivance with Battilal Meena.

how the accused caught:

SOG got a big success in the case of Reet paper out in Rajasthan.

SOG got a big success in the case of Reet paper out in Rajasthan.
Mastermind Battilal Meena arrested.
Another accused along with the absconding mastermind Battilal Meena was also arrested in the case of leaking the Reet paper.  SOG arrested both the accused from Kedarnath.
SOG had camped in Uttarakhand for three days.  The SOG nabbed Battilal on Sunday.
After arresting both the accused, the SOG team has left for Jaipur from Uttarakhand.