Due to increasing cyber crime in Bharatpur, another poor family came under the pretext of 25 lakhs, cheated of 12 thousand rupees on the...

The full form of Apbs

Candidates of Rajasthan Patwari exam can travel for free in roadways buses two days before and one day after the exam i.e. for a total of five days. 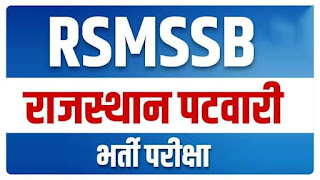 From October 21 to October 25, in ordinary and express buses of roadways, candidates will be able to travel free of cost to come and go to the examination center.  Travel facility will be available in private buses from 22 to 25.
Patwari’s recruitment examination will be held on 23rd and 24th dates, students will be taken in two rounds in every shift, 6 thousand 888 examination
Rajasthan Jaipur Selection Board will take the Patwa 5 exam in two phases on 23-24, a district level meeting was held in the update of Collector Rajendra Kisan regarding the examination, in the meeting, the Collector gave instructions to the employees regarding the arrangements and the matter of taking precautions.  somewhere
Police protection will be given to the paper, this time there will be no negligence
Question was asked from Ashok Gehlot regarding Reet exam.
Talked to wavekhabar regarding REET Exam:
IMPORTANT QUESTION: You guys tried very well in Rajasthan?
You yourself were monitoring about the exam of REET, but the opposition has also raised many questions regarding this?
Will you say anything about reet exam?
Ashok Gehlot Reply: Look at the atmosphere created in the REET exam inside Rajasthan and the people of Rajasthan, the way the people of the state went ahead and made a history that our youth are our companions,
Have suffered the wrath of Corona, the people of the entire state have suffered, even in the time of Corona, you must have seen that no one slept hungry, we had said that people, NGOs, activists, religious leaders, people of all parties together did not make any difference.  in serving and we appreciated everyone
Still we have called that time and again whether it is the rule of BJP, whether it is the rule of Congress, the news of paper out keeps on coming.
This time we have been more strict that we will be sacked from jobs, derecognized schools, will take action and together because there were about 15-16-17 lakh students and youth, we called for them where they will stay,  Have to go a day in advance, where will you stay, where will you eat food.  Just by giving a call, the public, the NGO’s, the activists, the public representatives have laid eyelids for them, whether they have come from UP, whether they have come from Madhya Pradesh, whether they have come from any other state.
The way they arranged for their food and drink, Ram opened the rasodes, made them hot food, made packets to feed them, I think this has never happened in history till date, in Rajasthan and nowhere in the country
This new tradition was in a way a form of the great traditions of Rajasthan, which we got to see.  This is not being digested by our opposition comrades, because the way they raised slogans of Zindabad, there they were not getting digested by the government and social workers, activists, all that is why some people are like this inside this society,  They are provoking it.
Second, what is that job will be 33 thousand which is very big I think a huge number we gave an opportunity.  They feel that if this job of 33 thousand posts will be taken, then it will be easy to provoke if the rest will not get it.  Well, nowadays the papers come in such a way that the child gets to know from the OMR sheet at the same time that the unemployed know whether I will pass or fail, then who knows that if my number is not likely to come and such a situation has arisen that I  I will not be able to pass, you instigate such people that the paper was out, so no matter how many crowds you gather, do the work of instigating them, this is not a good tradition.  Because of this, if the recruitment stopped, for a year, two years, then someone went to the court, then to the High Court, then to the Supreme Court, we have gone before, we have had to withdraw the case from the Supreme Court many times.  So if this is the tradition, then I understand how will the recruitments take place in future?
This opposition should understand that they should not make such a mistake because even under their rule, even when the Bharatiya Janata Party was in power, paper outs have happened many times, we have managed the whole process very well.  So whatever those people have become, some people have become such people to become leaders, remain leaders, they are running many rumours, bring the truth, bring it in front of us, give the truth to SOG, we promise  It is said that no one will be spared and should not be spared because you are playing with the future of lakhs of youth, the government will not spare them at any cost, believe it.  Quit provoking you guys, if this is the truth, it is known that on one center, on two centers, suppose the paper is out, then you have the right to tell, we are finding out that the matter reached this one center, two centers  It is gone, the paper is out, we will get the exam back there.  But under its guise, you want to call back millions of people, get them tested, where is the wisdom, it is beyond comprehension.  Therefore, if any complaint is received, if there is truth, then we will get the paper back at the centers where this complaint has been made.  How can you expect lakhs of people under its guise that the government will get them back to the exam.  So all these activities which are going on are not good and the government will not tolerate it.
Channel:
Reaching you the correct and accurate news.  india trending news, india news, crime news, treading latest news, be the first to know the news on our site wavekhabar.  hindi news, bharatpur news, sawai madhopur bharatpur news, bharatpur today news.
Publisher: Lokesh

how to use V wash:

Due to increasing cyber crime in Bharatpur, another poor family came...